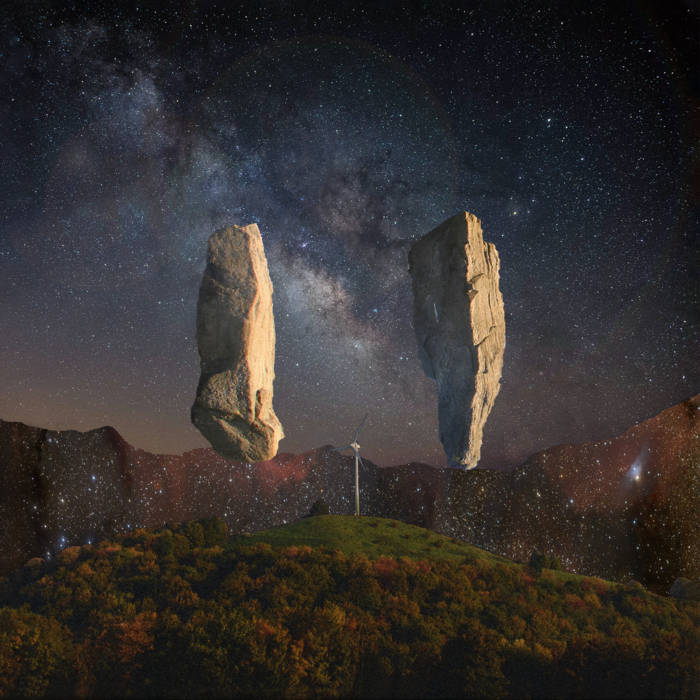 joopkonraad Dramatic on some moments, dangerous in others and always beautiful; even when the noise seems to resemble a train grinding to a halt. In short, these three krautish movements form a pulsating galactic symphony of epic proportions.

𝙅𝙤𝙚 𝙎𝙥𝙞𝙣𝙚𝙡𝙡 Hypnotic neo-kraut with a bit of noise and drone sprinkled on top. Guaranteed to get you stuck on the fractal-like patterns as they slowly build up the pieces to humming entities. Style-smart solutions and finesse glissandos con anima. Oh, what a tangled tasty web they weave! Favorite track: Descension.

vykr I was a little nervous at the start, "You can do better than this," i thought. It sounded oh-so familiar. Slowly though, the noise/density began to unfurl and the music began to spread itself out; the guitar crept from ear to ear, details became discernible, Benjamin channelling his inner Jaki Liebezeit. Three listens later and i have to say "Guys keep on playing music like this, and i'll keep on immersing myself in it." Favorite track: Fall.

DenpaFuzz Taking the kraut greats of the 70's as a reference, the band offers us three long improvisations in which a vintage motorik commands frenzied developments in a successful combination of passages of guitar reverbs and synthesizers. Its drone moments are altered with constant hums that accompany us on this journey to unfathomable sidereal atmospheres. Review: denpafuzz.com/2021/03/07/resena-shem-ii/ Favorite track: Descension.

On their sophomore album - aptly named "II" - Shem continue their research mission into the deep field of sonic improvisations, following up "The Hill AC" with a 40 minute journey into cosmic abysses, across obscured nightscapes and into the vastness of space.

Keeping up the momentum with a constant motorik groove, Shem explore both moments of atmospheric calmth and distorted maelstroms of psychedelic bliss, offering the listener a gateway to descend into their realm of musical experimentations once again.

"II" displays the next step in a continuous creative process, and we hope you enjoy delving into these soundscapes as much as we enjoyed creating them!

Thanks to everyone who made this record possible!

Bandcamp Daily  your guide to the world of Bandcamp

Featured sounds by K.Spark and WIZDUMB, plus Basi joins the show to discuss his latest release.